Cartago is drenched in unique culture, stunning architecture and a storied history that is still prevalent today. Because of this, the landscape of Cartago is unparalleled to that of most other regions in the country, even though it encompasses the fewest square miles. Travelers can explore pre-Columbian times and dive deep into the past in this truly unique province.

Before 1823, Cartago city was the capital of Costa Rica, but due to its location along the foothills of the Volcano Irazu, locals decided to place their capital in a more secure location away from a possible eruption. In 1563, Juan Vasquez de Coronado founded the city as one of the first Spanish settlements in the country. History buffs will love strolling down the streets of Cartago, as it acts as a gateway into the past of the region. The Basilica de Nuestra Senora de Los Angeles is a must-see in Cartago. Noted as the largest church in the city, it contains La Negrita or the Black Madonna, which is fabled to have healing powers.

Sitting in the Central Highlands of Costa Rica, the still active Volcano Irazu is one of the highest peaks in the province. Irazu made a name for itself in 1963 when U.S. President John F. Kennedy visited the country and the volcano erupted, which smothered area crops in inches of dust. Irazu has several craters, two of which are the most popular attractions. Visitors can reach nearby viewing stations, and on a clear day be able to see both the Pacific and Caribbean waters. Irazu Volcano National Park sits on 5,705 acres of lush montane forest, where travelers can witness many varieties of winged, furry and scaly wildlife. Although the area is fairly sparse in terms of large animals because of the volcanic activity, it is comprised of primary, secondary and cloud forest. The park is just 70 kilometers away from the city of Cartago, on the border of Cartago and San Jose provinces.

Cartago is one of the least visited regions in Costa Rica but it is full of culture and nature alike.

As the largest and most important archeological site in the country, Guayabo is a mysterious ancient city that was home to more than 10,000 people before the Spanish arrived in the country in the 16th century. Old inhabitants of the ruins are unknown by scientists, and currently only 10 percent of the 218 hectares have been excavated. Whoever these previous residents were, they built a very advanced culture: There are trails, bridges, water systems and homes that date back 3,000 years here.

The small town of Orosi boasts a beautiful landscape that includes a sweeping view of the valley, mountains and plantations. But one of the most visited attractions in this tiny town is the Iglesia de San Jose, which is the oldest church in Costa Rica this is still in use today. Constructed in 1743, this church was built in colonial style and has a wooden altar with traditional Mexican paintings, and a roof made with ceramic tiling and thatched cane. Throughout the entire town, travelers will find historic gems and ancient ruins that date back to 1,000 B.C. 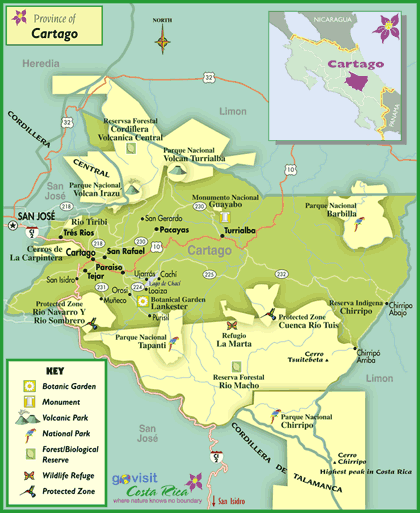 Often called Orosi National Park, Tapanti sits in the middle of the Macho River Forest Reserve, which features the meandering El Rio Grande de Orosi. Because of the unique location and diverse landscape, this park is one of the rainiest places in Costa Rica – the annual rainfall averages between 635 and 760 centimeters. Travelers can hike through the densely wooded forests along one of several trails that weave through the park.